Microsleep 101 All You Need To Know

Have you ever blinked and noticed the traffic light is green and the cars behind you won’t stop beeping. Or have you ever been at work and suddenly jerked to alertness as if you’d been asleep. Well, maybe you were experiencing microsleep. 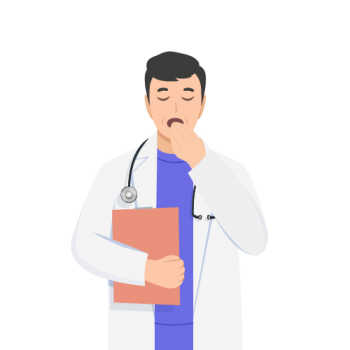 In this article we will examine exactly what a microsleep, the causes and how you can combat it.

What is a Microsleep?

Microsleep is exactly what it sounds like; sleep, scaled down to a few minutes or seconds, completely unintended.

If you experience microsleeps, most of the time you won’t even realise what happened, before or after. All you know is that you were tired before it, and you’re still exhausted after it especially if you’re a night-shift worker or the driver on a long, dull journey.

This seemingly harmless phenomenon isn’t as tame as it sounds. Sometimes you’ll microsleep while at work, or driving, and one wrong move can cause disaster. For example, some horrors that are attributed to micro sleeping workers are:

Technically anyone can experience microsleep at any time, but it’s more likely to happen when you’re exhausted. This exhaustion is usually from sleep deprivation rather than being mildly sleepy after a longer-than-average day.

On top of that, it’s most likely to happen when you’re doing a mundane, almost robotic task like driving or sitting in front of your computer crunching numbers.

Sleep deprivation can occur as a result of sleep disorders like insomnia or sleep apnea (also spelt sleep apnoea). The latter causes an extreme number of serious motor vehicle crashes in and outside of the UK. Insomnia and other disorders cause up to 20 per cent of motorway accidents in the UK, Brazil and Australia according to a 2013 study.

Sleep deprivation paired with mindless, repetitive tasks are a recipe for disaster as far as microsleep is concerned.

Your Brain During Microsleep

The reason behind microsleep is pretty clear: repetitive actions are boring, you’re tired, so the brain seizes the day and makes like it’s night. We haven’t yet figured out what exactly happens when this occurs.

Over the years a small pool of studies reveal that only parts of the brain fall asleep during microsleep, hence its rapid onset and short bouts. As only parts of your brain shut down, this might reveal why you don’t usually realize microsleep has occurred, but more research is needed to state this as fact.

There are, thankfully, two interesting studies that reveal a bit about how the brain acts during microsleep.

The first study we’ll discuss is from 2015, where test subjects were starved of sleep for 22 hours. Their brainwaves were monitored throughout this, and they were placed in a dark machine and given no task to complete. Naturally, the brain decided to microsleep as there was no adequate stimulation.

Researches observed the sleep-regulating part of the brain, known as the thalamus, dwindling activity-wise during microsleep episodes. However, sensory processing parts of the brain usually active in wakefulness had more activity than usual.

Further back in 2011, a similar study was performed on rats. Starved of sleep, the rats were shown to underperform during motor tasks. Meanwhile, the rats’ brains revealed that some of their neurons (mainly those impacting motor function) were essentially asleep while the rest remained active.

The study revealed why humans may experience cognitive decline when sleep-deprived if our brains react to sleep deprivation the same way as rat brains do.

Why Aren’t There More Studies?

The lack of studies on microsleep is, unfortunately, a result of researcher debates. So far, there are no specific tools researchers use to diagnose microsleep. Right now, researchers mainly use EEG recordings but they find them inadequate.

When the brain enters microsleep the changes are subtle, so they’re incredibly difficult to detect. Superior tools than the ones we have right now are needed to do further studies on microsleep.

When Does Microsleep Occur?

So with what it is, why it happens and how it happens, when should you be on the lookout for microsleep?

You should understand that you won’t be as prone to microsleep during the day as you are at night. So, even if you didn’t sleep last night, your brain isn’t too likely to want to shut down when it’s sunny and bright.

Furthermore, you have an increased likelihood of experiencing microsleep after you’ve been sleep deprived for some time. Rather than one sleepless night, you’ve had a few weeks of four, five-hour nights that build up into longer-term sleep deprivation.

Pair weeks of mediocrity, a bad last night, a mundane task, and you’re prime pickings for the microsleep bug.

As stated before, you’re particularly prone to bouts of microsleep while driving. There are numerous studies from around the world that back this up. Take a look at a few:

Drowsy driving is clearly one of the most dangerous activities you could engage in, on par with driving drunk. Pair that with micro sleeping and the activity could be fatal.

Then you are seriously at risk of microsleeps and should consider finding an alternate way to travel.

Do you ever get those days where you feel fine, but then you sit down or you get in the car and you realize you’re actually exhausted? You may think this will pass.

In reality, this could be a warning that microsleep or general fatigue is on the horizon for you. You should lookout for the following signs:

If you reach that last one it’s a sign that you need to pull over, take a break from your activity, or otherwise get yourself into a safe situation now. That jerk was most likely you waking up from your first microsleep episode and it may not be the last.

The best way to prevent microsleep is to get adequate sleep every night and only engage in activities when you’re entirely alert. But we understand that in this busy world, that’s not always possible. So, there are a few ays you can starve off microsleep in different scenarios.

To try and ensure you never experience microsleep, there are a few things you can do to keep on top of your daytime sleep health. Similarly, there are ways to help you keep it at bay when tiredness has already crept in.

You want to be sure you’re getting some high-quality sleep for 7–9 hours every night, or 7–8 if you’re an older adult. If you’re a teenager you may need up to 10 hours of sleep depending on your body clock.

The room should be dark, silent or with white noise, comfortable and safe. Avoid screens before bed, relax for a while before attempting to sleep, and try not to wake up earlier than your alarm.

To wake up as alert as possible, consider an alarm that wakes you up with daylight, or detects when you’re in light sleep and rouses you then.

2. Be Mindful When Consuming

Food and drink can impact fatigue, for example, drinking a sugary drink can give you lots of energy, but then you’ll crash, hard, and feel worse than you did before you drank it. Instead, you want to get your energy from slow-release carbs that keep you full and energized for longer.

Avoid sugary energy drinks, and definitely avoid alcohol, as we all know how alcohol can induce sleep.

Avoid sugar, but caffeine is your friend. Consider taking a caffeine pill. Drinking lots of coffee is also a smart idea not regularly, but if you need a boost.

Energy drinks with caffeine but no sugar are also your friends. Consider diet or zero-calorie energy drinks for this.

These supplements won’t help you in the long run, but they’ll help you starve off sleepiness temporarily. If you’re driving or in another situation where you can’t take frequent breaks, we recommend caffeine pills as energy drinks and normal coffee are both diuretics.

Speaking of driving, the criteria above applies but there are a few more things you can do if you must drive while you’re less alert.

If you know you’re going to be on the road for a while, sleep better the night before. Take a melatonin supplement, wake up when it feels natural to you, and try not to tire yourself out in the hours before your trip.

To stave off feelings of sleepiness while driving, pull over and take a 20-minute power nap.

Travel with a friend who can keep you alert using conversation, and who’ll be willing to take over the driving if needed.

Put something interesting on in the background of what you’re doing. Listen to music, a podcast, even the audio from your favourite TV show. Be sure it’s interesting, and consider an anti-sleeping app on your phone if you’re really desperate or not in the mood for one of your favourite pieces of entertainment.

In class or at work, there are ways to starve off that boredom and sleepiness too. The “in general” tips apply again, but there are three unique to the circumstance to take note of.

Whisper to the student next to you, strike up a conversation with the person in the next office cubicle, whatever. Talk to people in person as much as you can. It’s best if it’s a productive and engaging conversation.

If nobody’s around and you’re at work, reply to emails as a last resort. At least your mind will be active.

Understandably you can’t always move around if you’re trapped behind a desk. So, fiddle with a pen, jiggle your leg, tap your fingers. If you’re at work and have more freedom to move, do some chair exercises or stretches. If you control your office space, consider getting a standing or treadmill desk. If you’d rather sit, exercise bike desks exist, too.

Consider the Pomodoro technique, designed to keep your mind fresh, if you’re at work or are studying for school. You work for 25 minutes and then take a break for five, where you can walk around, stretch, take a drink or do whatever it takes to wake yourself up.

After the five minutes, you repeat the 25-5 cycle to keep your mind and body adequately engaged in your work.

Microsleep is a danger and one you should always be on the lookout for in yourself and your friends. Experiencing a microsleep is a sign you need to rest now, and take steps to prevent further episodes in similar future circumstances.

Pull over, take a study break, ask your boss for an early lunch, and take a 20-minute power nap. It won’t solve the issue, but it’ll hopefully stave off any more microsleep episodes today.

If you have any comments or questions on microsleep, feel free to leave them below.

Disclaimer – The advice above should not be considered medical advice and is meant to provide an overview of the kind of sleep issues seniors and older people may face. If you are at all concerned about your health, no matter what age, always consult your GP.